Not So Secret Gardens 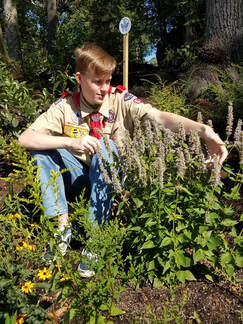 Eagle Scout Candidate Sean Stetson
Stewardship of land trust property is always a daunting task with removal of invasives, clearing of brush and debris and cutting up blow downs from the many storms that seem to impact Hamden. Fortunately, your land trust has been blessed with volunteers who not only lend a hand but contribute with so much energy and enthusiasm, it is awe inspiring.

Over the past few years, the HLCT has sponsored three Eagle Scout candidates whose projects are as ambitious and impressive as the scouts themselves. One such project by Rohan Kumar is on “Rocky Top” at 64 Rocky Top Road. His project consisted of constructing a kiosk that houses historical information of Edgar Heermance, the father of the Quinnipiac Blue trail. Heermance began the Blue trail system on Rocky Top in the early 1900’s. In a fitting tribute to Heermance, Rohan Kumar also established a scenic overlook loop trail that connects to the Quinnipiac Blue trail that runs through Rocky Top.

Another scout, Spenser Currello, took on the task of clearing a small forest of crowded saplings and invasives that were obscuring one of Hamden’s little-known gems, “The Brethren” on Shepard Avenue. This historical “small mountain” of three sizeable glacial erratics, on a quarter-acre of land, was hidden by the dense overgrowth. The Brethren was so well hidden that someone thought the Brethren had been moved elsewhere! Spenser and his volunteer crew of scouts, parents and friends brought the Brethren back into view as well as constructing an educational kiosk, clearing the trails and building steps that ascend to this glacial wonder.

The latest long-awaited addition to the Brethren is a Pollinator garden that Sean Stetson established. Sean’s project entailed the removal of invasive myrtle on a 20 x 50- foot bank and building a 50-foot-long stonewall to contain the garden. Sean and his crew also planted more than 75 diverse plants of native flowers, grasses, trees and shrubs to attract and entice the various pollinators to this garden thoughout the seasons. These gardens, however, are attracting more than insects and birds. As world-renowned entomologist Doug Tallamy has stated, “Our gardens can also offer refuge from an increasingly hectic and unpleasant world.”
​
These two extraordinary HLCT locations have seen an increase of excursions by Hamden residents who want to reconnect to nature. These scout projects could not have been timelier and more welcome. Come and visit Rocky Top and the Brethren, as well as the many other beautiful HLCT properties in Hamden. Join us in the future as we tend to the land or sponsor an educational outing!