​Do you have a pollinator-friendly Wild Yard? Let's take a look at some native shrubs that provide food and habitat for native butterflies, bees, hummingbirds, songbirds and other wildlife species. These native shrubs can be added to what already exists in your yard, or they can replace existing non-native plants that sometimes harm, or at best, do little to help native biodiversity. 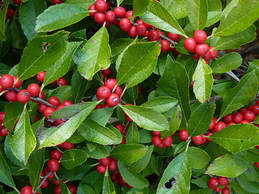 Winterberry (Ilex verticillata)
Winterberry (Ilex verticillata) is deciduous member of the holly family, losing its leaves in the winter. Even though it is naturally found in wet soils, it is quite adaptable to regular garden conditions in part-sun to sun. There is quite a lot of genetic variation and selections in the garden trade, with plants growing from 3 to 15 feet. Besides red-fruited varieties, there are plants with yellow or orange fruits in the trade as well. Winterberry is dioecious, meaning male and female flowers are formed on separate plants. To facilitate a good berry set, it is best to purchase at least one male for every three to five female plants and to plant the male nearby. Holding its berries through mid-winter and beyond makes for an extremely attractive plant in the landscape. These berries are also important to birds later in the winter season. 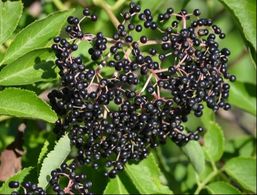 Elderberry (Sambucus canadensis)
Elderberry (Sambucus canadensis) is native to a variety of Connecticut habitats.  Its common name derives from the Anglo-Saxon word “ellen”, which means fire-kindler and refers to the use of its dry pith as a fire starter.  In the wild, elderberry is commonly found growing in early successional habitats and in sunny openings in moist forest environments.  Along watercourses, it provides an important function stabilizing banks and maintaining cool water temperatures through the shade provided by its large compound leaves.  Elderberry can tolerate a range of soil conditions but does poorly if it does not get adequate water.  Under good conditions with bright sun and well-drained, fertile soil, elderberry will sucker to form a thicket and can reach a height of 10-12 feet. In springtime, this shrub produces rosettes of white flowers similar in appearance to Queen Anne’s lace. Once pollinated, these become bunches of bluish-black fruit in mid to late summer.  It is recommended to plant multiple clones to ensure good fruit set. The bluish-black berries from Sambucus canadensis can be used to make wine, juice, jams and pies.  In the past, and in some native cultures today, elderberry is also used as a medicinal plant.  Local nurseries often offer the cultivar ‘Adams’ which is a prolific flowering and fruiting selection.  A variety of elderberry that produces red fruit – Sambucus racemosa – should be avoided.  Its berries are toxic to humans. Elderberry provides food and shelter for more than 75 native species. Songbirds such as cedar waxwings, mockingbirds and indigo buntings rely on the fruit, while deer, squirrels, bears and other mammals can also make use of the fruit and foliage for food.  It is also an important plant for supporting a multitude of pollinators.  Dense stands of elderberry can provide nesting locations for many birds. 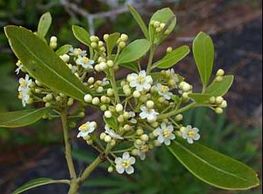 Inkberry (Ilex glabra)
Inkberry (Ilex glabra) is an evergreen member of the holly family. It is a native shrub with a round, dense form that can reach 6-8’ tall at maturity. However, there are varieties that are better suited to smaller landscapes that grow no taller than 3 or 4 feet tall such as ‘Shamrock.’ Inkberry has rounded, dark green leathery leaves and produces small white flowers in the spring that turn to dark purple to black berries in the fall. The berries are an important winter food for a variety of wildlife while the dense foliage provides shelter for winter birds such as white-throated sparrows, black-capped chickadees and tufted titmice.  It is important to note that inkberry is dioecious, meaning there are male and female plants. Fruit is produced on the female plants. Inkberry prefers to grow in full sun or partial shade and acidic soils that are consistently moist.  It is best to avoid planting this evergreen in areas exposed to harsh winter winds that can result in leaf burn.  Pruning every 3-4 years will rejuvenate plants and maintain a full, dense habit.  Over time plants tend to develop into suckering colonies although any suckers can be easily removed by pruning. Because of its shape and the fact it is evergreen, inkberry can be used in place of a number of non-native shrubs in your residential landscape. It is an excellent alternative to Japanese barberry, yew and boxwood. 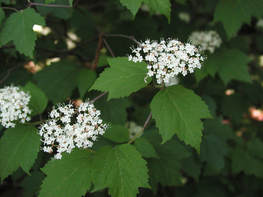 Mapleleaf Vibernum (Viburnum acerifolium)
Mapleleaf Vibernum (Viburnum acerifolium) The common name refers to the shape of the leaves which are typically three-lobed, resembling a maple. During the spring and summer, the leaves are dark green but transition to lovely shades of pink, red, and maroon as the cooler temperatures of autumn set in. The wonderful leaves accentuate flat clusters of tiny white flowers that open in late May/June. Occasionally plants with flowers that are brushed with pink can be found by the careful observer. Female Spring Azure butterflies lay their eggs on the developing flower buds which the larvae will then feed on. Spreading by underground suckers, this 3-4’ tall, very hardy species (Zone 3) can colonize in woodlands. Small, blue-black fruit ripen in fall and are eaten by wildlife. Commonly found growing in the forest understory, mapleleaf viburnum is a natural fit for a shady corner in the garden. While dappled shade is ideal, full sun conditions are tolerated as long as ample moisture is available. Plants prefer well-drained soils rich in organic matter. Mapleleaf Viburnum can be found growing on many HLCT properties including The Brethren, Johnson’s Pond and 165 Mather Street (at the corner of Servoss and Mather Streets.) 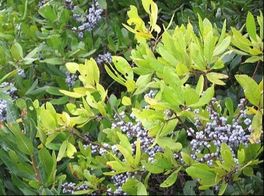 Northern bayberry (Myrica pensylvanica)
Northern bayberry (Myrica pensylvanica) is native to New England and is a very hardy, multi-branched shrub. This shrub is not to be confused with non-native Japanese barberry, which is extremely invasive and provides no wildlife value. Northern bayberry features glossy, deep green, aromatic foliage and is tolerant to salt, so it can grow in locations a short distance from Long Island Sound, and near roads, driveways and sidewalks. Due to nitrogen-fixing bacteria associated with its root system, it can also endure poor soils. Small gray-blue berries are formed in clusters on female plants. Be sure to include a male plant in your landscape to insure adequate pollination and fruit set. Bayberries are an important source of food for more than twenty species of native wildlife. The high fat content of the berries is especially important to birds, such as yellow-rumped warblers, that migrate late in fall or may even stay through a mild winter. Although northern bayberry is considered a deciduous shrub, it will often hold many of its leaves through the winter, providing cover for overwintering bird species such as white-throated sparrows and dark-eyed juncos. This shrub has a rounded form, and once established in a location, may spread through suckering to form a dense stand. Bayberry can thrive in a range of light conditions, from full sun to partial shade. Varieties differ in height from 3 to more than 10 feet, though 5 to 6 foot high specimens are more commonly found. Bayberry can be a good choice for a native privacy screen. Use it to replace invasive non-native plant species such as Japanese barberry, autumn olive, yew, forsythia and privet. 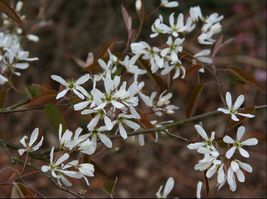 Shadblow Serviceberry (Amelanchier canadensis)
Serviceberry is known by many common names including shadbush, shadblow and Juneberry.  As its popularity has grown, it has also become known by its scientific name, Amelanchier, a genus with many species. Most are multi-stemmed and grow to heights of 15-25 feet. Popular varieties include downy serviceberry (Amelanchier arborea), which is named for the fine hairs on its leaves and twigs; and shadblow serviceberry (Amelanchier canadensis), a shrubby, multi-stemmed form; Allegheny serviceberry (Amelanchier laevis 'Cumulus'), which is a narrow and upright small tree with an abundance of blossoms. Serviceberry is popular because it is easy to grow and is a multi-season performer.  In early spring, it produces clouds of 5-petaled, slightly fragrant, snowy white flowers.  These short-lived flowers, useful to many butterflies, moths and bees as a nectar source, develop into deep purple fruits in early summer that are a food source for many wildlife species. And as the weather begins to cool in the fall, the finely toothed, small, oval leaves turn brilliant shades of orange, scarlet or gold. Serviceberry is a hardy plant that is easily grown in average, well-drained soil in full sun to part shade. It should not be planted in the vicinity of native eastern red cedars (Juniperus virginiana) because cedars are the alternate host for cedar serviceberry rust, a fungus that disfigures the stems, leaves and fruits of the serviceberry tree. Serviceberry is a member of the rose family (Rosaceae) and related to such plants as hawthorns, crabapples, cherries, plums, and peaches. Its berries are edible—some say they taste like blueberries—but they are typically eaten by wildlife long before they are ripe enough for human tastes. Many local nurseries stock different species and cultivars of serviceberry, making it a “must consider” when you are planning your wild yard. 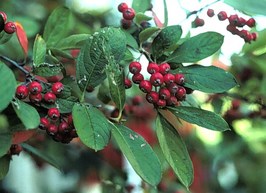 ​Red Chokeberry (Aronia arbutifolia), is the taller of the two species, reaching a height of 6-10 feet depending on cultivar and growing conditions. It is a lanky shrub that naturally occurs in the understory of wetland forests and forest edges, but does well in dry sunny locations as well.  Clusters of white flowers appear in the spring with dark green foliage throughout the late spring and summer.  In late summer, red chokeberry fruit ripens into small red berries on long stems. The cultivar ‘Brilliantissima’ is commonly found at nurseries and produces an abundance of red fruit and very glossy dark green foliage. Aronia fruit are an excellent food source for migrating birds such as thrushes, catbirds and waxwings. While we would have a difficult time eating chokeberries because of their astringency (hence the name), birds do not seem to have that issue. Also in the fall, the leaves of the red chokeberry turn brilliant shades of scarlet, orange and yellow, adding to its appeal and making it an alternative to burning bush, Euonymus alatus, which is considered a non-native invasive species in Connecticut. When used as a border or hedge, it can replace privet, another non-native invasive.

Black Chokeberry (Aronia melanocarpa)
Black Chokeberry (Aronia melanocarpa) is a smaller shrub than red chokeberry, growing to a height of 4-5 feet. Its berries are purple-black in color and virtually inedible by humans because of their sour taste. While the berries are not a first choice for wildlife, this means the berries are often available in the winter when there is little other food to be found. The foliage on black chokeberry is dark green and shiny.  Black chokeberry also features good fall color, especially when planted in sunny locations, and can replace foundation plantings such as burning bush. The cultivar ‘Autumn Magic’ is even more compact than other varieties while another cultivar ‘Viking’ produces an abundant crop of very large fruit.