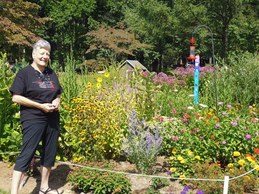 SGPA member Julie Hulten
Hamden's Sleeping Giant State Park has been an attraction for athletes and nature lovers for many generations. Many have taken a hike or two on the green crests while others are daily visitors.  In the mid 1800's several adventurers built rough cabins and spent much of the summer in these retreats amid the flora and fauna. In 1924, the Sleeping Giant Park Association was formed by James Toumey.   The purpose of the group was to purchase as much land as they could "for use as a park, forest, or game preserve...with the eventual purpose of transferring the same for the use and benefit of the public."  The hills and their stewards of the SGPA have flourished in the years since then.

Four years ago, SGPA Environmental Stewardship Chair Gail Cameron and Hiking Committee Chair Danny Brass applied for and were awarded a matching grant from the Audubon Society to establish a butterfly garden near the entry to the park. They removed grass from a 15 x 45 foot area near the park entrance.  The space was carefully considered allowing the large area of lawn which it abuts to remain for the frequent use by kite fliers, Frisbee players and Special Olympic athletes honing their skills in practice rounds.

Winding up its 4th summer, this magnificent spaces evolves over time.  Plantings now include black- eyed susans, various milkweeds,  anise hyssop, Joe-Pye weed, and yarrow.  Most are native plants and drought resistant. Other plants such as zinnias, marigolds, daisies, butterfly bush and lantana are non-native but non-invasive here. Visitors are able to observe the attraction of great-spangled fritillary butterflies as well as red admiral, tiger swallowtail, black swallowtail, spicebush swallowtail and monarch butterflies.  And of course bees are in great abundance. A clean up party of volunteers gathers each spring to kick off the season.  There is a fair amount of cutting back at this time rather than in the fall so that birds and insects in need of habitat or food can feed upon the seeds.  Dandelions and violets which invade the garden aren't removed in the early spring.  The thoughtful gardeners wait until the other emerging pollinators are in bloom before removing them so as to provide for the needy insects and birds.

Maintenance throughout the season is led by long time SGPA member Julie Hulten who spends several hours each Sunday morning tending the lush space.  Others help out when available and spot check while visiting the park to provide water when needed.  Volunteers to help with these pleasant chores would be welcomed. A hint Julie shared to enhance the artistry of the garden is to cut the border plants low in early July. This adds depth to the colorful picture. In addition to being a great gardener, Julie Hulten is a Giant Master. Hiking all 32 trails on the mountain earns you that distinction and Julie has accomplished it not only once, but 17 times!  Julie put the word out on Facebook looking for an artist to create a totem for the butterfly garden.  She was delighted to have many responses to the invitation.

A design by 14-year-old Maliah Ryan was selected from among the applicants.  The totem, which Maliah also built, incorporates butterflies, insects and flowers found throughout the park. As a happy coincidence, Maliah's great grandfather worked to create the park's Tower Trail which was built between 1935 and 1939. Each year, more than 100,000 people visit Sleeping Giant State Park. The Hamden Land Conservation Trust applauds Hamden citizens and organizations who preserve natural areas in the yards.  Hamden Wild Yards is a project sponsored by Hamden Land Conservation Trust to highlight efforts which enhance the town's biodiversity and local ecosystems by planting native and noninvasive wildlife-attracting plants.